Rarely did exotic masquerade as authentic.  That’s part of what made exotica exotica: an odd minor key or flourish of African percussion here, some warmed-over Arabic melody there.

Exotica, in all of its post-War musical splendor, created an aura of mystery and taboo with only a vague musical relationship to the culture it simultaneously tried to evoke.  In the hands of Les Baxter, for instance, a composition described within an album’s liner notes as “Congolese-inspired” might otherwise have no audible connection to African music.  Being told that there was a connection was enough for many listeners.  All of this gets problematic, of course.  To so casually invoke the exotic is to invite old stereotypes about the “primitive” and a sorry history of Western ethnocentricism.

This week’s selections skirt the issue somewhat by completely transcending any geographic or cultural source of inspiration. That’s why I love the more obscure strains of exotica – even early psychedelia.  They maintained a basic degree of air-conditioned comfort for the sedentary daydreamer, but, in leveraging the idea of the exotic, musicians could paint with wilder, weirder strokes than they might have conventionally used. 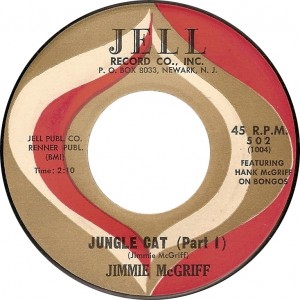 1. Jimmie McGriff, Jungle Cat (Part 1) (Jell 502)
Philadelphia organist Jimmy McGriff, born in 1936, was one of the most successful organists of his generation.

Though rooted in gospel and blues traditions, McGriff was also a trendsetter.  His 1962 hit – an instrumental version of Ray Charles’s “I Got a Woman” – was a massive crossover success, a benchmark in the jukebox-friendly idiom that would coalesce in the ’60s as “soul jazz.”

McGriff is joined on “Jungle Cat” by his longtime guitarist Larry Frazier (with a stunning solo on part two) as well as his brother Hank (on bongos). Together they lurch forward into a thick, fetid gloom of studio echo, leaving it to the listener to decide whether they ever emerged again.

McGriff, a legendary, prolific career to his name, passed away in 2008. 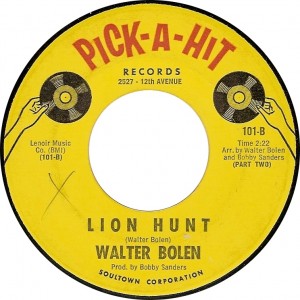 A great pleasure to hear recently from Walt Bolen, who filled me in on the backstory behind “Lion Hunt,” as well as some of his own biography.

Walt Bolen, born in 1948, was raised in the San Fernando Valley, California.  His was a musical family, especially on the side of his mother, Alma Bowser Bolen (who was also related to pioneering bop pianist Bud Powell by marriage).

In addition to a Hammond A-105 organ at home, Bolen would grow up playing organ in the church, as well as participating in the San Fernando school system’s music program.   Bolen attended one of the few high schools in the area with a Hammond console, taking classes there under the supervision of Mrs. Thelma Becky, the school’s choir teacher.

“[I was] looking to gain popularity among my school mates and friends. Music was my way of doing that,” Bolen notes.  It was 1966, Bolen’s senior year at San Fernando High School, when he first wrote “Lion Hunt,” which was partly inspired by Les Baxter’s exotica standard “Quiet Village.”

In 1966, Bolen and Adolphus Alsbrook – a veteran jazz bassist and arranger introduced to Bolen through his horn player friend Carl Smith – went into Los Angeles’s legendary Gold Star Studios to record.  There, joined by a drummer, and with charts written by Alsbruck, they used the Hammond organ to lay down the basic tracks for “Lion Hunt.”   Saxophone and guitar parts would be added by session players in turn.

In 1967, Los Angeles record producer and impresario Bobby Sanders released the recording on Pick-A-Hit Records, one of several labels he operated at the time.  Somewhat to Bolen’s surprise, the B-side of the single – “Lion Hunt (Part Two),” that is – was the same recording, only with dubbed-in lion sound effects, an idea that was entirely Alsbrook’s.

Bolen remained in the San Fernando area in the ensuing years, teaching music, playing lounge and club gigs, and making some (unreleased) home recordings. In the early ‘70s, Bolen and his friends Willard and Ernestine Stroud formed the Ar-Que recording company, for whom he released a strong 45 – “Breaking Out” b/w “Peace Chant” – in 1972.

Walt Bolen otherwise remained away from commercially released music until more recent years.  Bolen, who now resides in Antelope Valley, California, remains active in music to this day, returning to his roots and playing organ for his church.  He’s also released a CD of his own inspirational material – The Casting of Pearls – which is available at cdbaby.com or through his facebook page.  Please do check out more of Walt Bolen.

Many thanks to Walt Bolen for contacting me, and for the great conversation and great music. 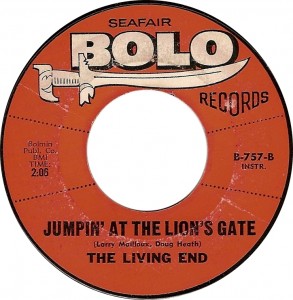 The Living End, Jumpin’ At the Lion’s Gate (Bolo B-757-B)
Like other regions, the Pacific Northwest had its own circumscribed rock ‘n’ roll scene in the twilight years before the British Invasion. Popular groups like the Kingsmen, Paul Revere & the Raiders, the Wailers and the Sonics all emerged from the scene, honing their raucous R&B-infused version of rock ‘n’ roll on the Northwest’s club circuit and mixing it up with versatile, sometimes racially integrated, seven- and eight-piece horn combos.

If this selection’s flipside – a tight James Brown-inspired instrumental entitled “Skyride” – is any indication, the Living End were pretty typical of the scene. “Jumpin’ At the Lion’s Gate,” is another story. Part mod jazz instrumental, part go-go floorshow romp, the Living End didn’t necessarily set out to be exotic, but this still probably sounded pretty primal after throwing back a few Coffee Grogs fireside at Kona Kove.

The lone record by the Living End, “Jumpin’ At the Lion’s Gate” was released on Bolo, which, along with sister label Seafair, was one of the Pacific Northwest’s great indie labels.  (Sharp-eyed readers might remember another Seafair/Bolo 45 from this post.)   Released in 1966, it was also something of a symbolic endnote in the chronology of the early Northwest sound.