Funk and salsa, as musical forms, were both ascendant in the late ‘60s and early ‘70s. They were forms that were nourished within culturally aware, politically mobilized communities. According to the tradition that America will always co-opt its most disenfranchised, it follows that for a few years in the ‘70s you couldn’t throw a brick at our popular music without hitting a syncopated bassline or a conga drum. Things got ever weirder as the decade went on and R&B and salsa’s musical components were further unhinged from their message. Easy-listening maestros Percy Faith and Ferrante & Teicher made funk records. Nashville’s timbaleros were booked for six months solid, I’ve heard.

It was inevitable that Latin music and funk would have converged, and without that much commercial debasement, at some point. And so they did. Latin funk was a diffuse phenomenon, though, less an extension of an earlier counterpart boogaloo (with its composite of vamping Afro-Latin rhythms and R&B attitude) than a part of the overall psychedelic cultural swirl that made crossover experiments so much fun in 1970. Ray Barretto and Joe Bataan – artists identified with the boogaloo – made popular Latin funk records. Tejano artists like Augustine Ramirez and Tortilla Factory made them, as did Los Angeles’s El Chicano and Oakland’s Azteca. So, too, did black artists like Jimmy Castor and War.

‘70s Latin funk can be a real mixed bag, however. Tracks like Ray Barretto’s “Together” and Ocho’s “Hot Pants Road” hold up extremely well today, pulsing with wild, psychedelized energy while similar experiments by Harlem River Drive and Malo seem dated and overly self-conscious. All, including this week’s geographically disparate artifacts, partook of the same spirit, though, diving headlong into that cauldron where Hammond organs, vibraphones and conga drums swirled in equal measure.

Born in Puerto Rico, Johnny “Ray” Zamot is a versatile percussionist and bandleader and one of the more daring of the younger generation that forged their musical skills in the orquestas and combos of New York City’s fertile ‘60s Latin scene. Unlike their mentors (who generally disavowed the style), Zamot’s was a generation that was comfortably committed to the youthful, brash style of the boogaloo, though.

Zamot is today still an active part of New York City salsa, but it’s his run of hard-to-find releases of the late ‘60s through the mid-‘70s for which he’s more widely remembered. 1968’s The Latin Soul of Johnny Zamot or 1970’s Boogaloo Frog represent a typical, if not exemplary, late ‘60s blend of boogaloo, Latin jazz, mambo, cha-cha and guaguanco – son-based Latin styles that would soon all be formalized under the salsa rubric.

Even by Zamot’s fairly adventurous standards, though, “Spaced Out” is a strange one. If its snappy horn lines and pop sensibilities seem to place it somewhere in the previous decade, then that inverted bassline and echo-drenched waaah-chuck-chuck-chuck chorus seem to point to some indeterminate, loopy year in the future. 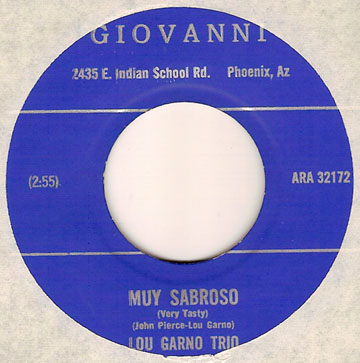 2. Lou Garno Trio, Muy Sabroso (Very Tasty) (Giovanni)
“Muy Sabroso (Very Tasty),” as the story goes, was released as a promotional tie-in with Giovanni’s Italian restaurant/lounge in Phoenix, Arizona. It’s an unusual, though mutually remunerative, way to make a record, and the arrangement probably made Giovanni Furcini feel pretty good about himself in 1972. Not as good as the record collectors who keep coming across unopened boxes of this 45 some thirty-plus years later, of course – but still, pretty good.

Lou Garno, along with the trio’s organist (Larry Crinklaw) and drummer (Jim Golini), are all still active in Arizona jazz circles. It’s not entirely clear what role Garno played in this groovy bit of Latin-fired jazz, though, as he was and is a saxophonist and flautist. “Muy Sabroso (Very Tasty)” is not live, either, of course, despite the better efforts of our wonderfully canned emcee and audience.

A plumbing tool specialist now sits at the former site of Giovanni’s.

3. Tempo 70, El Galleton (Mericana)
Tempo 70 were a brief-lived group led by Argentinean-born Bebu Silvetti, a pianist and arranger whose career peregrinations took him to Spain, Mexico and Miami as a sort of international contractor in the world of Latin music. The early ‘70s found Silvetti in Puerto Rico, where he convened Tempo 70 for a few albums of polished salsa and Latin pop.

1972’s “El Galleton,” Tempo 70’s highpoint, somehow successfully steers between cuatro- and percussion-driven Afro-Latin rhythms, Hammond-fueled funk and jazzy piano runs – each with a section to itself: “El Galleton”’s charts could have been a disaster in less skillful hands. A technical bonanza for the band, of course, though hell for anyone on the dancefloor.

This selection was taken from Tempo 70’s debut album (entitled El Primer LP), which also happened to the first full-length release of Mericana Records, the New York City Latin label operated (along with Caytronics Records, a Mexican pop clearinghouse) by the Cayre Brothers before they went on to found disco giant Salsoul Records.

This entry was posted in Jazz Obscura, Latin, Soul. Bookmark the permalink.